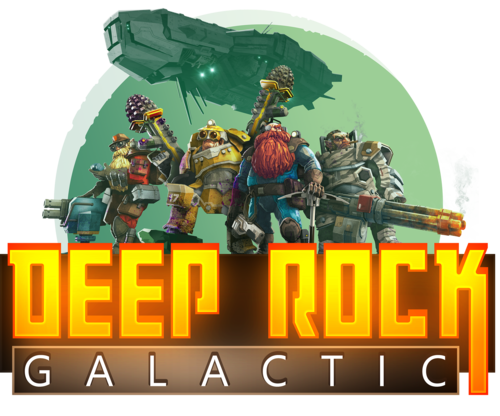 Deep Rock Galactic is a cooperative first person shooter in early access from indie developer Ghost Ship Studios. Players are galaxy-fairing mining dwarves sent on dangerous missions on a hostile alien planet. The missions contain a variety of objectives and types of enemies, and allow for up to four players to play together.

This past year saw a slight uptick in the number of videogames I was able to play. This was particularly possible because I started talking with a couple old friends who often gamed together and they invited me to join them in playing specifically co-op games.

Multiplayer games aren’t exactly foreign to me, as I played World of Warcraft on and off since 2005. However, back then, I didn’t have great internet and I played very casually. I never got into raiding, and so I never really chatted with people on VoIP. I did often do multiplayer with people in the same physical location, and in fact I had a WoW arena team with my brother in high school as we played in the same room, negating the need for voice chat. Since then, I just didn’t play that many videogames cooperatively, and I didn’t have a consistent group. I still played a bunch of single player games, but I tried something new with Overwatch, as I wrote about a couple years ago. That was a lot of fun, but my lack of consistent playing group meant that after Overwatch, I went back to single player games…or Netflix.

This new group opened the door to Deep Rock, and it is spectacular. With the major caveat that I’ve only played the game with people I like hanging out with, Deep Rock seems to check every box you could have for this genre. The gameplay is pretty simple to learn; you shoot aliens and you mine rocks. But once you know the basics, you can start exploring the complexity of the game. There are multiple classes with different guns and abilities. They allow for grappling across levels, creating instant platforms on walls, permanent moving cables, or digging out tunnels through rock. More stuff is being added every month as it is still in early acess. Each class can now undertake quests to upgrade their various weapons which can be swapped out. There is quite a lot of firepower to choose from, with a big rotary machine gun, flamethrower (or ice thrower), shotgun, or even automated turrets, depending on your class.

There are also multiple types of alien bug creatures. Some are pretty standard enemies that run up and attack you. Others are suicide bombers that will stand next to you and detonate. If you know where they are coming from, you pick them off from a distance, but if you let them get close, you better call them out to your teammates who are busy mining rocks or trying to stop other bugs from eating their face off. There are also flying bugs, some that will try and pick you up and drop you far away from your teammates, ranged acid spitters, and giant armored beasts. Some bugs are even attached to shadowy cave ceilings waiting for you to drop under them, where they grab you and pull you helplessly away. Your only hope is for your teammates to blast the leach before you expire. These make for some hilariously chaotic battles.

And that’s not even counting the various types of levels you can play in. Each “ecosystem” on the planet has its own quirks and difficulties, from poison shooting mushrooms to radioactive crystals to giant sand storms that blind you for a short period of time–even in the midst of an enemy wave. The level design itself is beautiful even though I believe every level is algorithmically generated. There are several different missions types, including simple mining missions, missions to collect rare alien eggs, salvage operations where you recover equipment and then use it to escape the planet, and others. My favorite is extraction point missions where you are dropped in an area with many large crystals you must dig out and return to a central location while surviving waves of enemies. Then you have to protect the outpost until the your cargo is rocketed away, and finally battle your way to a rendezvous point.

The cooperative nature of the levels really makes the game for me. Putting up a good fight as aliens slowly surround you is tense, but when one of your teammates is suddenly picked up by a grabber and flown away, the panic starts to set in. There is intensity when making a daring run for one of your downed teammates, throwing up a temporary shield and reviving them while swarms of bad guys surround your bubble waiting for it to disappear. Another fun moment was at the end of a level where we had completed all the objectives, we now had to make it to the extraction rocket they sent. Somehow, the only way over to that part of the cave seemed to include narrow bridges of unavoidable enemies and it was taking too long to deal with them. It didn’t look like we could make it to the rocket before the level ended, meaning all of our work would be for nothing. With 90 seconds left, The digger thought he might be able to burrow straight through 60 or 70 meters or solid rock to get the chamber with the rocket, so we covered him, as tons of giant bugs tried to crawl into our tunnel while he slowly dug it out. We popped out right next to the rocket and got inside before time expired.

I recommend Deep Rock for its fun collaborative environment and interesting gameplay. Its level and mission design is really cool and it’s a pretty fun alien shoot ’em up, too. But the biggest personal takeaway from this game is that adults need to look at cooperative videogames as a medium for social gatherings. Modern society, and the internet in particular, has created a somewhat isolating social landscape. Netflix and HBO and YouTube mean that we live in an golden age of television and creativity, but also that we don’t need to interact with others in person in order to experience it; it comes directly to our devices in our bedrooms or living rooms. Cooperative gaming can act as a virtual social room, placing you at least ear to ear with your friends as you share an interactive experience and challenge. When I play Deep Rock, I don’t think of the time spent as “entertainment”, I think of it as “social interaction”. Even though my friends are thousands of miles away, we are talking about life and hanging out. I see this as a fulfillment of what people thought the internet could be; a place to allow people to connect in ways they could not before.